In 1915 worshipers saw the need for another African Methodist Episcopal Church in the growing metropolis of Houston, Texas.  The vineyard was ripe for the work of our Lord and Savior Jesus Christ for those who would step out on faith to start a new congregation.

In a rented house in the Third Ward area of the city, South Wesley held on to the A.M.E. spirit and theme “GOD OUR FATHER, CHRIST OUR REDEEMER, MAN OUR BROTHER” and began organizing its Steward, Stewardess, and Trustee Boards along with other organizations and auxiliaries.

The Rev. H. C. Calhoun donated the first property on the corner of Anita and Burkett to build an edifice and parsonage.  He served as Minister for a number of years, and with the help of South Wesley members, they built the structure themselves.

In December 1942, under the leadership of Rev. A. W. Wilson, the membership increased and the mortgage on the church was burned September 9, 1945.  A new edifice and parsonage were built on the same site of Anita and Burkett and the membership continued to grow under his leadership.  The building program continued, adding a Hammond Organ and other church furnishings.

In 1962, South Wesley came to the realization that the location on Anita and Burkett was not to be their permanent home.  The church site was foreclosed upon.  After the foreclosure, Wesley Chapel A.M.E. Church on Dowling Street was kind enough to share their facilities and allow the South Wesley members to hold worship services in their building.

In April 1963, under the leadership of the Rev. L. D. Lincoln, the church purchased another location at 2200 McGregor Way.

In 1963 Rev. M. C. Cooper became the pastor at the McGregor Way location and also lived above the church. Due to the impending construction of State Highway 288 and eminent domain, the church sold the property to the State of Texas. Because the church had been displaced due to the Highway, St. Luke A.M.E. Church, located at 10103 Ashville, allowed South Wesley to hold services in their church in the interim.  Some months later, Riverbrook Baptist Church moved into a new edifice, and South Wesley became tenants in their old edifice.  The Gospel Choir and Junior Choir were organized during this period. It was during Rev. Cooper’s tenure that history was made when Sis Oma Wilson, after having served 54 years as a Stewardess, was consecrated a Deaconess during the 1974 Annual Conference by Bishop John Hurst Adams. The church later purchased property at the corner of Airport and Martin Luther King Boulevards in the South Park area of Houston.

In 1979, Rev. Johnny E. Jennings was appointed to South Wesley.    He served the church for twelve years.  During his tenure, the final note on the property on Airport Boulevard was paid off and the first step in the actual construction
of a new building for worship was marked with a special groundbreaking service.  In 1980, Rev. Jennings and the members welcomed Bishop Henry W. Murphy who held the groundbreaking ceremony to start the building of our current edifice.   Bishop Murph, Presiding Elder Leland Jenkins, Presiding Elder X. L. Williams, and Presiding Elder O. L. Dawson helped the members lay two cornerstones in an April 12, 1981 ceremony.  God led us to this site, heard our prayers, blessed our gifts, guided our plans and provided the needed wisdom to complete this facility.  Numerous furnishings and improvements were made:  pulpit furniture, pews, carpeted sanctuary, new choir robes, usher uniforms, altar furnishings, Leslie Speaker, lighted sign, foyer table, indoor cross, altar candles, permanent seating in the choir loft, purchase of a van, office furniture and construction of a storage house and garage. In addition, the church mortgage was paid off in July 1985 with a mortgage burning service attended by Bishop Robert Lee Pruitt.  Later, a groundbreaking service for the fellowship hall was done with the assistance of Bishop James H. Mayo. The foundation was laid and the drywalls were constructed for the fellowship hall.  In 1991, after seeing the fruits of his labor, Rev. Jennings was elevated to Presiding Elder of the Houston District.

Airport Boulevard, which dead-ended at the church, had opened as a main thorough fare in prior years with through access from State Highway 288 to William P. Hobby Airport.  This brought hope that the church and the membership would continue to grow and flourish.

In November of 1999, Rev. Kevin Bullock was assigned to South Wesley.   In 2004, the Phase II note on the fellowship hall was satisfied and a ceremony to extinguish the note was held with Bishop Gregory G. M. Ingram officiating. The members worked tirelessly and made great accomplishments with Rev. Bullock: new awning at the sanctuary entranceway with indoor/outdoor carpeting, custom ornamental railing on the front of the fellowship hall, new pulpit chairs.  In October 2009, under Rev. Bullock, South Wesley, for the first time ever, successfully hosted the Sixth Session of the Texas Annual Conference with Bishop Gregory G. M. Ingram presiding.  Again, history was made during this conference when one of the long-time members, Sister Fannie Williams, was consecrated a Deaconess by Bishop Ingram.
﻿
In November 2010, Rev. Hunt L. Harris, Sr. was appointed pastor of South Wesley.  Being a praying man, he affectionately called the church “The Garden of Prayer.”  Under the encouragement of Rev. Harris, the church continued to be a beacon of light to the community.

The church experienced struggles and challenges from its humble beginnings in the Third Ward section of Houston to the present day.  The properties secured and the mortgages burned, the church was finally alive and well on Airport at Martin Luther King Boulevards.

On November 15, 2014, Rev. Brenda Payne was appointed to South Wesley during the Tenth Episcopal District Planning Meeting in San Antonio, TX by Bishop Vashti Murphy McKenzie.  This history making appointment gave South Wesley its first female minister to serve this waiting congregation.  Rev. Payne brought with her an obvious love for people, the church and the Lord.  She showed her eagerness to teach and encourage the congregation to serve the surrounding community through outreach, community walks and revivals.  Rev. Payne was elevated to Presiding Elder of the South Houston District after one year at South Wesley.
In honor of the 100th Church Anniversary in 2015, the Fellowship Hall was named The Johnny Edison Jennings Fellowship Hall, a classroom was named the Earl Foster Junior Library and plans were made to bury a time capsule for the occasion.

​At the Tenth District Planning Meeting in November of 2015, Rev. Ralph V. Martin, Jr. was appointed pastor of South Wesley.   Rev. Martin had an anointing that brought the disciples into the Word in a powerful and sometimes humorous way.  He was a great teacher of the Word.  Under his leadership, the church made some repairs to the
facilities, including major repair of the church foundation, repair of and replacement of the 7500-ton air conditioning system, cleaning and painting of the church steeple and organized a senior ministry, Brothers and Sisters in Christ (B.A.S.I.C).  The members also buried a time capsule on the east side of the church in 2017.  Rev. Martin served for only two years before the mandated retirement age of the A.M.E. Church. He retired from pastoral duties at the Texas Annual Conference in 2017.

On November 18, 2017, at the Tenth Episcopal District Planning Meeting in Houston, TX, the Rev. Mary Reed was assigned to South Wesley.  Rev. Reed was ordained as an Itinerate Elder of the African Methodist Episcopal Church in 2003.

With God’s grace and under her leadership, the membership has increased exponentially, with several new members being baptized.  She incorporates vibrant and exciting bible study to enhance and further promote the Word of God.  The New Member Class has been re-instituted and the Puppet Ministry continues each month.  Souls are being saved, lives are being transformed and members are rededicating themselves back to Christ.

Rev. Reed has led the way in securing numerous building improvements:  purchase of a stainless-steel refrigerator, office computer and printer, landscaping, and repair of the roof on both buildings.  An application was submitted, approved, and South Wesley was awarded a grant from Tenth Future, Inc. to assist with repair of the rear exterior wall.  Plans are currently underway to re-brick the wall in the immediate future.
Rev. Reed’s contagious and enthusiastic leadership gave life to taking ministry beyond the four walls.  The church has performed multiple outreaches.  Under her leadership, the members worked in the community by distributing free food that reached throughout the southside community in Houston.  Christmas toys, Easter breakfast and cash donations were provided to the community.  Love-Lunches are also distributed annually throughout the community on Valentine’s Day.  Rev. Reed has hosted Fun Day at the Movies and the church is proud of its Holiday Theatrical Plays. The Youth showed support to and provided gift baskets to the Houston Police and Fire Departments.
These recorded accomplishments serve as living proof of the anointing that God has placed on Rev. Reed’s life in ministry.  She continues to let her light shine before men, that they may see her good works, and glorify the Father which is in heaven.
​
We give recognition to the Pastors whose faithful leadership has been instrumental in the progress of this great church from 1942 to the present: 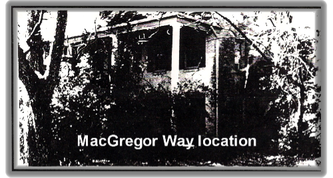 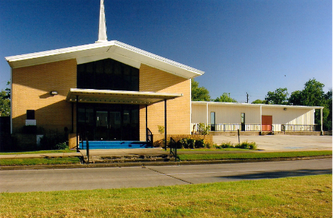 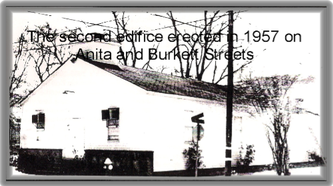